Julia Toronczak is very open about why she advocates for Down syndrome research: Everything she does is with her brother’s future and wellbeing in mind and for the advancement of medical treatments for individuals with Down Syndrome.

Julia often speaks of her experience growing up with her twin brother Michael. Michael was diagnosed with Down syndrome at birth, but as Julia says, “although Michael is nonverbal, he is my best friend from before birth and has taught me so much about unconditional love and how to treat everyone with kindness.”

Julia graduated from UC San Diego in California, with a degree in General Biology. As she studied, she became aware of the need for more scientific research for the aging population of individuals with Down syndrome. Only a few decades ago, people with Down Syndrome were expected to live no more than 30 years; nowadays with advancing medical technologies and therapies, scientists have been able to address some life-threatening conditions such as heart defects, and in return they have been able to increase their life expectancy to around 60 years of age. But with a more prolonged lifespan, researchers have found that individuals with Down syndrome are susceptible to a new host of health-related challenges; with Alzheimer’s disease playing a major role.

Today, Julia is an advocate for Down syndrome-related causes. As she and Michael grow older, Julia said, she realizes that there is yet much work to be done in this field for the aging population.

That is why she decided to support my321 and pledged to raise $10,000 to LuMind IDSC. Julia is training to run a half Ironman Triathlon in September 2021, and even if he is not running, swimming, and biking alongside, her brother Michael will be with her at every step of the way. 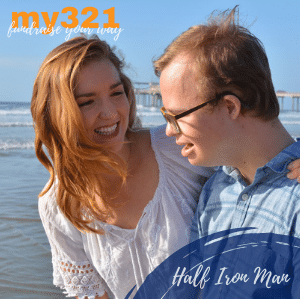