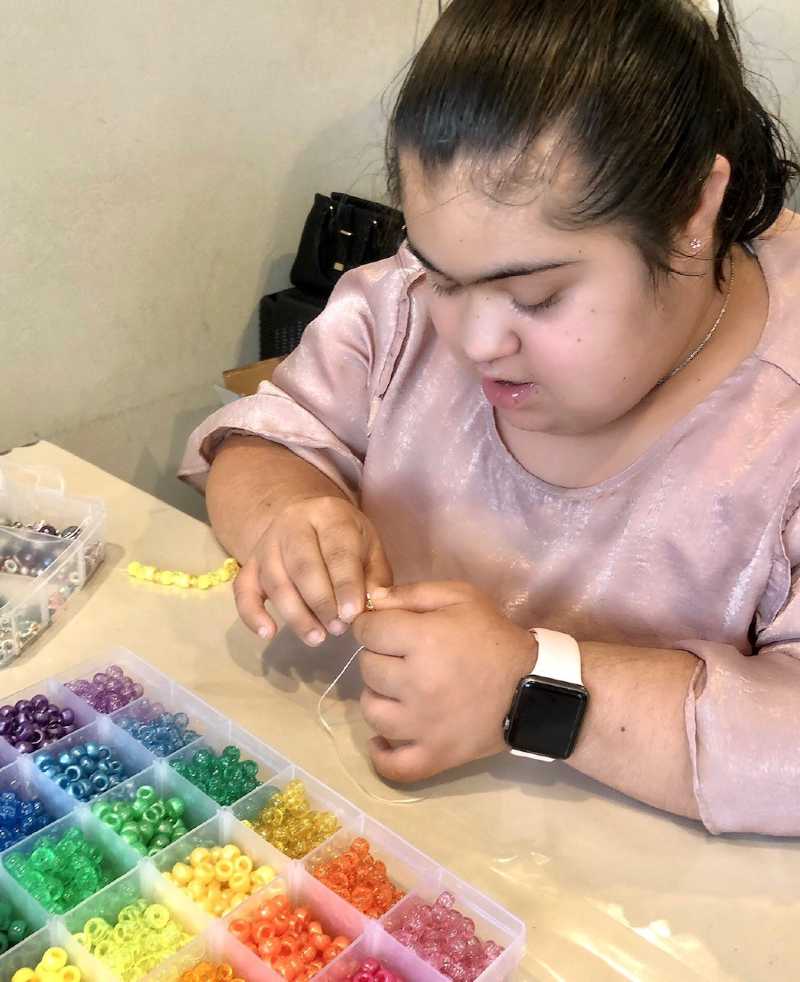 The Crafts of Love

Two Sides of the Coin 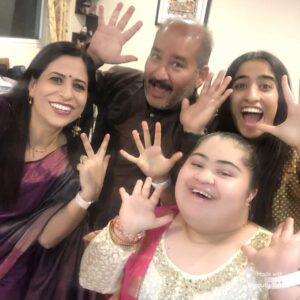 How do you find the time? This is probably a question that Priya and Puja Pandit get all the time. At 15 years old, Priya attends a competitive high school that is already preparing her to apply for college; her sights are set on institutions with strong STEM programs, even if they take her across the country. Priya has a passion for science, and she shares this passion by tutoring students younger than herself.

Puja on the other hand is the musician and the dancer of the family. Twenty-two years old, she has been described by her teachers as a “bundle of joy.” She is warm and amicable and everyone who meets her ends up falling in love with her. Puja is also fiercely organized and a talented piano player who doesn’t need nudging to remember to practice. Her mother, Urmila, said she has always felt Down syndrome doesn’t have the potential to thwart her daughter’s independence. On the contrary, Urmila said, Puja is talented, friendly, and resolute. Down syndrome is just another element that adds to the richness of her character and of her uniqueness as an individual.

From India to the United States 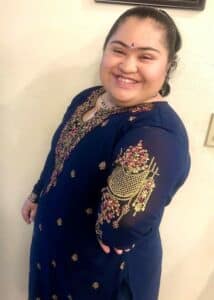 Puja was born in India; her mother Urmila remembers how the doctors warned her that her baby “would never be able to do anything, she would be a vegetable.” Undeterred by their rude and antiquated opinions, the young mother grappled with the scant resources available for people with disabilities in her region. But just getting by was not enough for Urmila and her daughter. Urmila is a dentist and scientific minded like her younger daughter, so she got to work and devised a system to help Puja in the areas of speech and learning. She wouldn’t let the naysayers have the last word; she could see potential in her daughter.

When they came to the United States, the Pandits were thrilled to see that there were more resources available. At the time of their emigration, Puja was two years old, and was eligible to receive care from professional therapists and coordinators. She even attended a daycare along with neuro-typical children. The inclusive environment helped her flourish and make many friends. Nowadays Puja attends an organization that helps people with Down syndrome gain work experience. She also aims to join an organization that teaches Bollywood dance to people with Down syndrome. 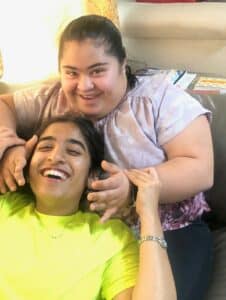 The sisterly bond between Priya and Puja seems much stronger than the typical relationship between siblings. They have taught each other the value of patience, positivity, and empathy and Priya’s career goals reflect that compassion; she aspires to become a researcher and help people with Down syndrome live healthier and more independent lives. Even at her young age, she is aware of the health problems that concern the Down syndrome population, but it is clear that she won’t just sit there and watch it happen to Puja, her best friend.

The idea behind The Crafts of Love originated when Puja and Priya realized that by making bracelets, they not only had the opportunity to enjoy time together, but they could also use that time and effort for a greater purpose. They launched The Crafts of Love on Etsy in June 2021. Through their colorful designs they hope to spread some cheer and positivity while donating 50% of their proceeds to LuMind IDSC’s mission to help people with Down syndrome live full and healthy lives.

Now that Puja is 22, Urmila and her husband Vippul worry about her future. They shared the very real fears of not being able to be there for her, and the looming threat of Alzheimer’s disease. For now, the Pandits have devised plans to help her financially in the future. In the meantime, they all concentrate on stimulating Puja’s mind, by focusing on puzzles, learning math with Vippul, and even playing the piano. Although she is independent, her parents dream for Puja to someday have a full-time job, live independently, and advocate for herself. Perhaps Priya, the young entrepreneur, will go on to play a major role in the scientific world and give people with Down syndrome the opportunity of a long and healthy life and the gift of growing old accompanied by family memories.

Did these young ladies inspire you to get involved? Donate to LuMind IDSC and support our mission. For more educational resources join myDSC, it’s free!