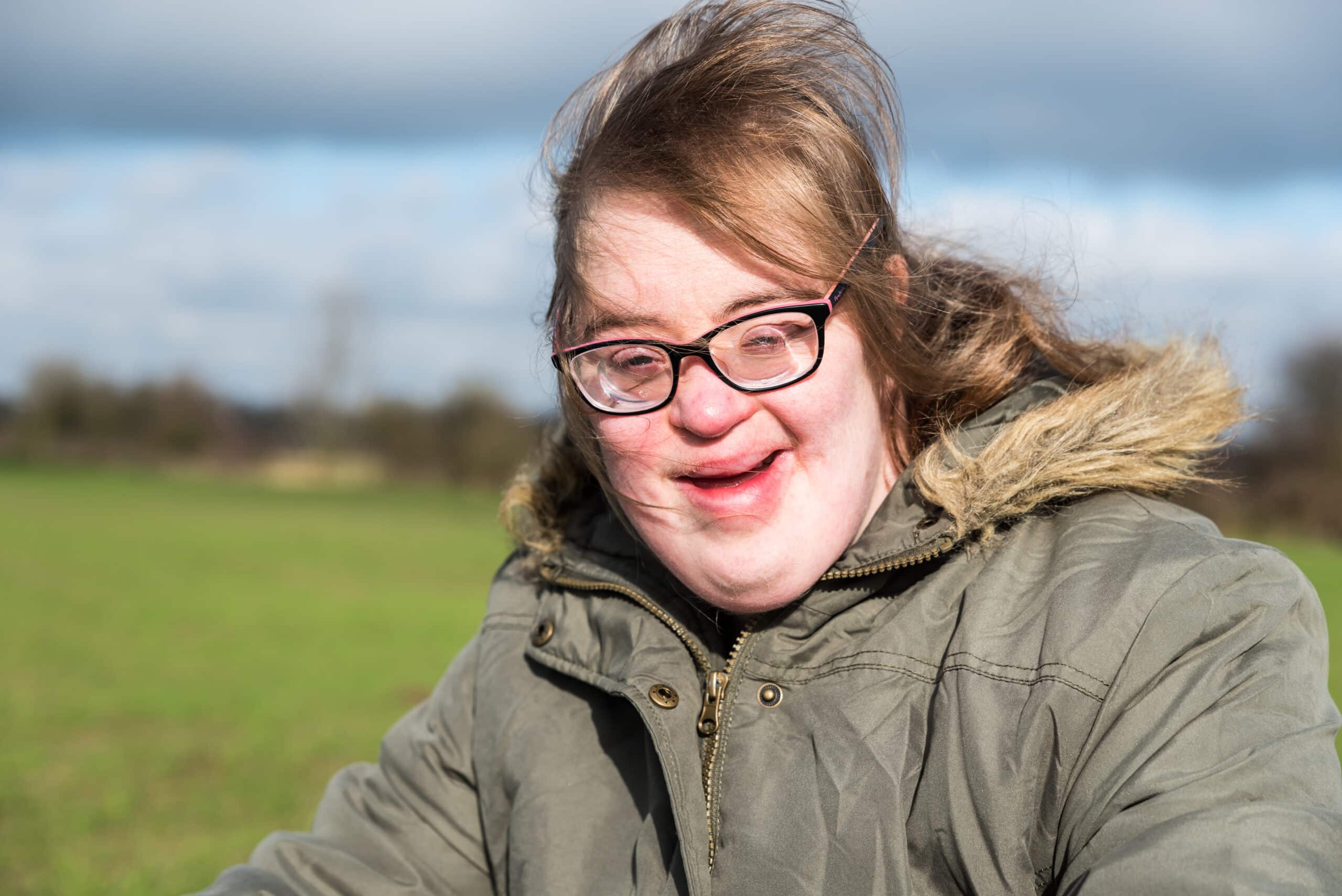 AN EXPLAINER FOR THE DOWN SYNDROME COMMUNITY

On April 7, 2022, the federal Centers for Medicare and Medicaid (CMS) finalized their coverage policy for drugs known as monoclonal antibodies directed against amyloid for the treatment of Alzheimer’s disease. The final decision differs from the draft coverage policy published on January 11, 2022, with modifications based on public comments submitted to CMS at that time – including 1,800 comments from the Down syndrome community.

LuMind IDSC joined nine other national organizations in issuing a public statement on April 11, 2022. Our organization developed this guide to address key questions from the Down syndrome community regarding this important policy development.

FOLLOWING THE APRIL DECISION BY CMS, WHAT IS THE STATUS OF BIOGEN’S ADUHELM?

Aduhelm, an anti-amyloid antibody drug, was approved by the FDA under accelerated approval for the treatment of early stages of Alzheimer’s disease last year (June 2021). CMS’ final decision will only cover the cost of this drug for people enrolled in a CMS-approved randomized clinical trial. The trial must be designed to test if the drug is useful in slowing cognitive decline or other symptoms of Alzheimer’s disease. The trial will also need to collect safety data so CMS can determine if the potential benefits of the drug outweigh the risks. If so, CMS could expand coverage for Aduhelm to all people with Alzheimer’s disease including those with Down syndrome.

This means that, for the next several years, of the six million Americans with Alzheimer’s disease, only a few thousand clinical trial participants will have Medicare coverage for this particular FDA-approved drug. From a process standpoint, this determination places an unprecedented barrier to access this FDA-approved treatment and will delay wider reimbursement of the drug for many years. From a human standpoint, as we know, CMS’ final decision is disappointing for people with Alzheimer’s disease today who don’t have years to wait for access to a treatment. The FDA’s approval of Aduhelm is controversial, as many Alzheimer’s experts have been vocal in their opposition to the FDA approval of the drug, saying that the treatment has uncertain benefits and clear risks. We believe this influenced the CMS decision to gather more data on Aduhelm before it becomes widely available.

WHAT DOES THE POLICY MEAN FOR PEOPLE WITH DOWN SYNDROME?

It is gratifying to note that CMS heard and took into consideration the concerns of the Down syndrome community during the public comment period. As a result of this successful community advocacy, CMS removed language that would have automatically excluded people with Down syndrome from participating in CMS-approved trials. However, questions remain as to how people with Down syndrome can participate in future CMS-approved trials. The decision language clearly calls for future trials to include a pool of participants “whose diversity of patients are representative of the national population with MCI due to AD or mild AD dementia,” but does not specifically address the inclusion of people with Down syndrome and how their cognitive differences should be addressed in future trials. In addition, LuMind IDSC will consult with experts in healthcare services about how this decision might impact access to these Alzheimer’s drugs for Medicaid beneficiaries. LuMind IDSC and our advocacy partners plan to discuss these and other issues with CMS in the coming months.

ARE THESE NEW DRUGS SAFE FOR PEOPLE WITH DOWN SYNDROME?

We don’t know, because no one with Down syndrome has been included in the clinical trials of anti-amyloid antibodies (such as Aduhelm) to date. We think that should change. As other anti-amyloid drugs gain FDA approval, they may need to follow the same path as Aduhelm for CMS reimbursement coverage, unless they obtain full FDA approval with strong evidence of clinical benefits to treat the symptoms of Alzheimer’s disease in their clinical trials.

All the drugs in this class are associated with a major side-effect called ARIA (swelling or microhemorrhage in the brain) that is detected by MRI typically before symptoms are observed. It is unknown how people with Down syndrome will tolerate these drugs and what the risk of ARIA may be for this specialized population, especially as adults with Down syndrome have increased frequency of seizures as they age. Well-controlled safety studies are critical before the drugs can be used widely to treat people with Down syndrome. We strongly encourage pharmaceuticals companies developing anti-amyloid antibody drugs, or the NIH, to run well-controlled safety trials in the Down syndrome population.

WHAT ARE CONSIDERATIONS FOR FUTURE ALZHEIMER’S CLINICAL TRIALS IN DOWN SYNDROME?

Ultimately, it is the goal of LuMind IDSC to ensure that strong data is obtained on new Alzheimer’s treatments to help guide physicians and families on their use in people with Down syndrome. We also want to be sure that the payors (CMS, insurance companies) provide appropriate coverage so Americans with Down syndrome have the same access to new, potentially useful drugs, as their fellow citizens.

WHAT SHOULD MY FAMILY DO NOW?

Families will play an important role in accelerating research into DS-AD. Increased participation is critical for the next phase of Down syndrome research. Please consider:

Assessment scale
An assessment scale is a tool by which the efficacy of a drug, therapy, procedure, curriculum, or other variable can be measured. In the case of a clinical trial for an Alzheimer’s drug, an assessment scale would be used by clinicians and researchers to set a baseline of the participant’s cognitive abilities and evaluate behaviors and daily living. Assessments are typically conducted at the commencement of a trial, and at different points during the trial. Researchers measure each data point to ascertain if the drug, therapy, etc. is having an impact. With Down syndrome-associated Alzheimer’s disease, the tools used to date (such as those used to measure efficacy of Aduhelm) cannot be used with people who have an intellectual disability, so separate trials with different assessment scales would be needed to accurately measure efficacy for the Down syndrome population.

CED: Coverage with Evidence Development
Coverage with evidence development is Medicare coverage of a treatment or technology conditioned on data gathering through a clinical trial or registry to determine its effectiveness. With CED, the developers of a new treatment or technology gain access to a larger pool of trial participants for whom the treatment/technology would otherwise be cost-prohibitive; likewise, a population that may benefit from the use of this treatment/technology would have the ability to join clinical trials determining its effectiveness without cost considerations serving as a barrier to entry.

Clinical Benefit
Clinical benefit is defined as a favorable effect on a meaningful, measurable aspect of how a patient feels (e.g., symptom relief), functions (e.g., improved mobility) or survives as a result of treatment. In determining approval and coverage of medications and therapies, this is one of the most important factors for federal agencies like the U.S. Food and Drug Administration (FDA) and the Centers for Medicare & Medicaid Services (CMS). In everyday speech, this is whether or not the drug/therapy “works”—how effective is it at addressing the problem it seeks to treat?

CMS: The Centers for Medicare & Medicaid Services
The Centers for Medicare & Medicaid Services (CMS) is a federal agency that administers the nation’s major healthcare programs, including Medicare and Medicaid. While the Food and Drug Administration (FDA) is responsible for approving medications/therapies that are safe and effective for the U.S. population, CMS is responsible for determining which of these can be paid for with federal funds. This is of significant importance to people with disabilities and those over 65, many of whom rely on the coverage by Medicaid and Medicare to pay for otherwise unaffordable drugs and therapies.

NCD: National Coverage Determination
National coverage determinations are decisions made by CMS on whether Medicare/Medicaid will pay for an item, service or therapy on a nationwide basis. NCDs are made through an evidence-based process, with opportunities for public participation. CMS usually makes a NCD for a whole class of drugs (for example all anti-amyloid antibody therapies).

Phase 3 Clinical Trial
As defined by the FDA, a clinical trial in the third phase of the four-phase clinical research process is made up of between 300 to 3,000 volunteers who have the disease or condition the drug/therapy being tested is meant to address. In this phase, which can last from 1 to 4 years, the primary goal is to judge the treatment’s efficacy and determine what sort of adverse reactions, if any, it may cause. Drugs/therapies that are proven to be safe and effective during this phase are approved by the FDA, after which they make their way to the market for sale to the public.

Phase 4 Clinical Trial
As defined by the FDA, a clinical trial in the final phase of the four-phase clinical research process takes place after the drug is on the market. During this phase, which involves several thousand volunteers who have the disease/condition the drug/therapy is meant to address, the safety and efficacy of the treatment continues to be tested.

RCT – Randomized Controlled Trial
Randomized controlled trials are a form of scientific evaluation used to determine the effectiveness of a new medication or therapy. Participants in this kind of trial are divided at random into separate groups. Groups may be given different interventions—and one group may be given no intervention at all—in order to compare the effects of the drug/therapy to other treatments or a lack of treatment.