This is a surprise because in March, Biogen announced that they were stopping the trials early due to a futility analysis. Now they say that further data and analysis show that they did achieve efficacy and will be taking their data to the FDA. We don’t know how long this process with take but hopefully in a year or two we will know if the drug will be approved.

Aducanumab is an injected drug and people will need to get shots every 2-3 weeks. It is also likely to be expensive but compared to the cost of care for Alzheimer’s patients, could still be economically beneficial. We hope, of course, if the FDA approves the drug, insurance companies will then cover it. 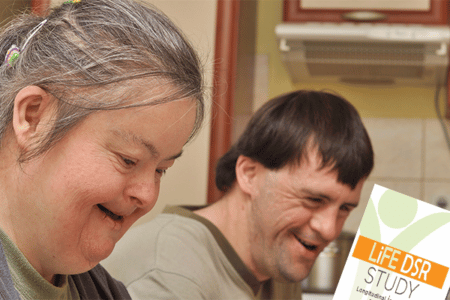 The LIFE-DSR Study is enrolling adults over the age of 25 in several clinics throughout the U.S.

LuMind IDSC Foundation is leading a funding effort to address this crisis through the Down Syndrome Clinical Trials Network (DS-CTN). Since DS-CTN launched in 2018, four sites have begun enrolling adults with Down syndrome in the Longitudinal Investigation For the Enhancement of Down Syndrome Research (LIFE-DSR) – an observational investigation with the goal to better understand the cognitive and behavioral changes along with the health issues found in adults with Down syndrome as they progress toward Alzheimer’s disease. There are also two assessment tools, specifically for people with Down syndrome, in development. LIFE-DSR is expected to be completed by 2021 and LuMind IDSC will continue to monitor the progress of promising drug candidates to make sure that people with Down syndrome are included in future trials.

Read more about aducanumab in the press release from Biogen.